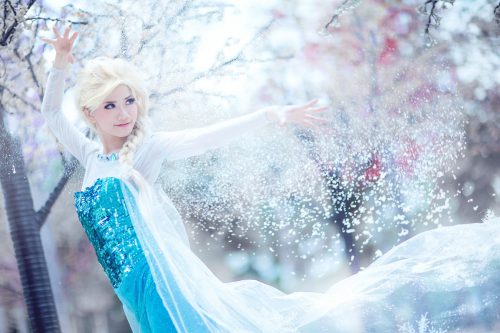 We here at Pixajoy would like to thank Arisa Chow wholeheartedly for choosing us as her photo book supplier! She chose to print a few sets of her cosplays as photo books that recently went on sale at the Visual Arts Expo 2016 (VAX) in Kuala Lumpur, 3 – 5 June.

Arisa is a well-known cosplayer in Malaysia who is also a fashion designer, social media influencer, and part-time model. She is also an expecting mother!

Now, you may be wondering what ‘cosplay’ is all about. It is a blend of the words ‘costume’ and ‘roleplay’ as enthusiasts dress up as characters from media like anime, comics or TV shows, as well as trying to act like their chosen profiles.

Moving on, here’s the star of the day, Arisa!

Hi Arisa! Thanks again for choosing us to print your beautiful cosplay photos. Could you tell us a little about yourself?

You are most welcome Pixajoy! My name is Arisa and I’ve been cosplaying for almost 12 years to date. Aside from cosplaying, I am a costume and fashion designer by profession who also enjoys blogging on www.arisachow.com.

What do you do that makes you want to jump out of bed in the morning?

Such a passion for the arts! It’s no surprise that you love to cosplay then, but why do you cosplay and how long have you been doing it?

It started off as a hobby (for fun) when I was 12 years old because I wanted to portray my favourite characters without being judged for my fandom to a certain anime/manga series. It used to be a form of “escape” from reality because when you are all dressed up in events, it feels like you are in another world for the next 8 – 12 hours before going back to your daily life. The process of making your own costumes and props can be quite a stress reliever too, unless you are rushing it last minute, of course then that would be stressful. 😛 I would kindly like to advise young cosplayers to plan their budgets (according to priority) and timing properly to enjoy this hobby.

I’ve been in this community for about 12 years already, I don’t think I’ll be quitting it completely as it feels like it’s a part of me already after a decade of being so active in it. It basically became my passion, and it inspired me to take up fashion and costuming as a profession.

Wow, you’ve put so much time and effort into your cosplays! Could you describe the characters you’re portraying in the photo books you ordered and where they’re from?

Well, there were 3 series from the photobooks I made and they are all of different genres instead of just Japanese anime characters. Cosplay isn’t just limited to anime and manga characters, even western movie characters can be cosplayed!

Harley Quinn is a character from DC’s Suicide Squad, an upcoming movie releasing in cinemas this August 2016. She’s personally my favourite character. Also, the shoot I did with JRice Photography has proven to be a challenging one with tons of experimental angles to make it unique, till even to point of literally risking my own neck.

Mavis from Hotel Transylvania is from a western animation movie by Sony Pictures which already has 2 movies released. I always wanted to cosplay Mavis and I am glad that I got to make her character part of my photobook series for those who love the character and movie too.

And last but not least, Rize Kamishiro from Tokyo Ghoul, one of the all time favourite anime series in the ACG (Anime, Comics and Games) community. This was more of a conceptual projection of the character.

Your dedication for the portrayal of the characters you’re cosplaying as is wonderful! Other than that though, what are some of the other memorable cosplays you’ve done?

The most memorable character I’ve ever cosplayed would be my Elsa from Disney’s Frozen. It literally made it to a lot of international websites back in 2013 like 9gag and such. Till this very day, people in the ACG community still refer me back to my Elsa cosplay lol.

Oh wow, that’s an amazing feat! So, we were wondering… why did you chose to produce a photo book for VAX?

This was actually an opportunity collaboration by VAX to help promote my cosplay works, as before this I never thought of even producing photo books in such large quantities. A big thank you to VAX for believing in me!

VAX made an awesome choice. Why then, did you decide to do a photo book giveaway contest and also to sell them?

Hosting giveaways is a fun way of getting some interaction with my followers (friends/fans/readers) and also a way to see them showing their support through shares and comments. Sometimes we just need a little teaser to get the party started, right? 😉

However like I said before, never once have I thought of selling my works until VAX approached me with this opportunity. I see this photo book sales as a way for my fans to cherish my works in a hardcopy form. Also, the pictures in these photo books have never been released online, so they are considered exclusive works.

In a way, it gives an outreach for both photographers and I as artists who create artworks to be appreciated. Also the funds will help us upgrade our equipments to provide better works for our fans to enjoy in the near future.

Woah, an exclusive hmm? Having seen the photo book, we’re curious. What inspired you to design your photo book the way you did?

It just came naturally, nothing in particular really. I designed the layout according to the mood given out by each series, it’s like letting the photos speak for themselves. As they always say, “Photos are worth a thousand words”.

A good photograph can definitely inspire a thousand word essay. So, do you think you’ll be using photo books for anything else in the future?

Most definitely! For family, travels, special occasions or anything at all since I love taking photos to immortalize each memory. I guess my next big photobook project would be my pregnancy journey as I will be collaborating with an artistic local photographer to capture each month’s progress before compiling it into a complete series. 🙂 Kinda excited about it!

I first came across Pixajoy’s services online on 11street and saw a lot of good reviews on your services. That made me confident in approaching you guys and the rest is history. Thank you for producing such magnificent quality prints!

No, thank you for being a supporter of our products! 🙂

Well, looks like photo books can be used for commercial purposes too! The human imagination is only limited by their creativity! Why not pull a macgyver and find your own unique way to use a photo book?